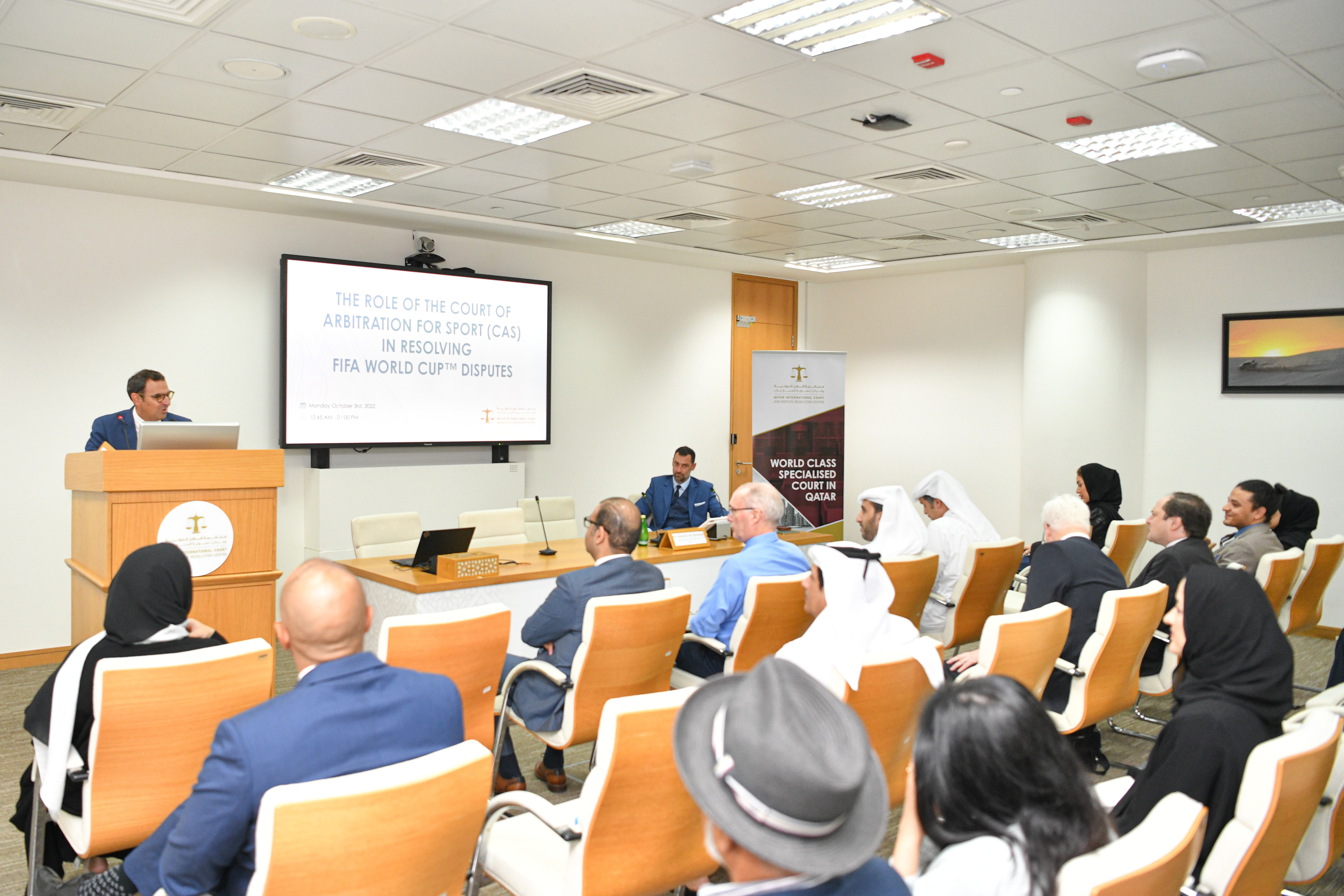 The Qatar International Court and Dispute Resolution Centre (QICDRC) hosted a seminar with The Court of Arbitration for Sport (CAS) to discuss the CAS’s role in the resolution of disciplinary and commercial disputes directly or indirectly linked to sport, with an emphasis on disputes that arise during events such as the FIFA World Cup and the Olympic Games.

Mr. Antonio De Quesada, Head of Arbitration Services in The Court of Arbitration for Sport, and Dr Zachary Calo, Professor of Law at Hamad bin Khalifa University and Senior Counsel at McNair International, were the distinguished guest speakers at the seminar.

Commenting on the occasion, Faisal Rashid Al-Sahouti, CEO of Qatar International Court stated: “This seminar is an opportunity for us to collaborate with a highly respected independent body in the arena of sporting disputes, the Court of Arbitration for Sport, in order to discuss dispute mechanisms and sports arbitration, especially within the context of the upcoming FIFA World Cup Qatar 2022™.”

Guest speaker Mr. Antonio De Quesada, Head of Arbitration Services in The Court of Arbitration for Sport said: “The CAS ad hoc divisions have become a key element for the good organization of different international competitions. For instance, the CAS Ad Hoc Divisions are present in the Olympic Games since 1996 and in the FIFA World Cup since 2006. The CAS Ad Hoc Divisions provide legal certainty and a very fast resolution system to the relevant stakeholders to solve disputes that may arise during the competitions, as such disputes are per se very urgent.”

Dr Zachary Calo, Professor of Law at Hamad bin Khalifa University and Senior Counsel at McNair International added: "As Qatar prepares to host the FIFA World Cup, this event provided an opportunity to explore the critical role of the CAS in addressing disputes that arise during mega-sporting events."

This seminar comes as part of The Qatar International Court’s commitment in engaging with local and international legal professionals and experts in its continuous efforts to promote access to justice, and encouraging a better understanding of arbitration and dispute resolution within the community.